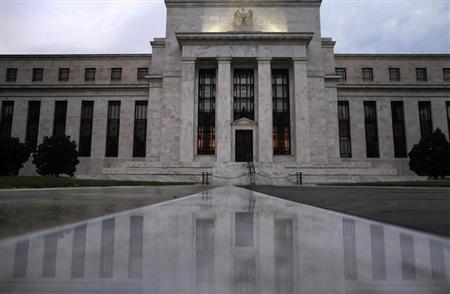 (Reuters) - U.S. Treasury and Federal Reserve officials worried about the growing possibility of a catastrophic default are crafting contingency plans to mitigate the economic fallout if Congress fails to extend America's borrowing authority, a source familiar with the plans said.

With just eight days before the Treasury Department says the U.S. will hit its $16.7 trillion (10.46 trillion pounds) borrowing limit, lawmakers and the White House remain far from a deal to extend it. Officials are examining what options might be available to calm financial markets if a U.S. debt payment is missed.

The specifics of their planning remain unclear, but the source said an area of special focus is a key bank funding market known as the tri-party repurchase agreement, or repo, market, where banks often use Treasury bills, notes and bonds as collateral for short-term loans from other banks and big money market funds.

Some of the earliest alarm bells for the 2008 financial crisis emerged from this market, and on Wednesday interest rates demanded for accepting some T-bills as collateral shot to the highest in five months. Were the repo market to seize, easy access to cash by banks to meet short-term funding needs could be jeopardized, and that could have far-ranging implications for credit markets and the economy.

On Thursday, U.S. Treasury Secretary Jack Lew is scheduled to testify before the Senate Finance Committee and is likely to be grilled about the contingency plans by Senator Orrin Hatch, the panel's top Republican.

The source said officials believe their plans can only try to mitigate fallout they expect to be catastrophic if Congress fails to raise the debt limit by October 17, the date Treasury estimates it will run out of additional borrowing authority.

Against that anxious backdrop, officials are trying to gauge which Treasury securities pledged as collateral would cause the most concern in a default, the source said.

Many of the discussions are between Treasury officials in the Office of Debt Management and the Federal Reserve Bank of New York, which acts as the government's agent in the markets. The New York Fed's Fedwire Securities Service is used to settle loans in the $5-trillion repo market.

Spokeswomen for the Treasury and the New York Fed declined to say if contingency plans were being discussed or in place. The Treasury representative referred to remarks made by Lew in a recent letter to Congress. Lew said: "There are no other legal and prudent options to extend the nation's borrowing authority."

In another recent letter to Congress, Lew wrote: "Any plan to prioritize some payments over others is simply default by another name." He added: "There is no way of knowing the damage any prioritization plan would have on our economy and financial markets."

In the run-up to the 2011 debt-limit crisis, the Treasury looked at a range of options including delaying payments, asset sales and prioritizing payments, according to an inspector general's report last year.

According to the report, "Treasury officials determined that there is no fair or sensible way to pick and choose among the many bills that come due every day." The U.S. Treasury makes roughly 80 million payments a month.

The Securities Industry and Financial Markets Association, a trade group that represents hundreds of securities firms, banks and asset managers, said last week it has drawn up plans that might make a debt default less chaotic.

These plans would hinge on Treasury giving a day's advance notice that it would be missing a scheduled payment. This would allow dealers to configure systems to handle defaulted securities so they still might be used in transactions, including in the repo market.

The trade group's working presumption was that the Treasury, each night before it believed it would miss a payment, would announce that it would pay creditors one day late, according to SIFMA Managing Director Rob Toomey.

On Tuesday night, Hatch, sent a letter to Lew and other members of the government's Financial Stability Oversight Council, demanding to know what contingency plans are in place in the event of a default.

The letter referred to minutes of a Fed video conference meeting with Treasury officials on August 1, 2011, at the height of the last debt limit crisis.

Those minutes reveal that in that meeting, Treasury and Fed officials discussed contingency plans that had been developed in the event of a default.

Those contingencies, according to the minutes, included "plans that the Federal Reserve and the Treasury had developed regarding the processing of federal payments."