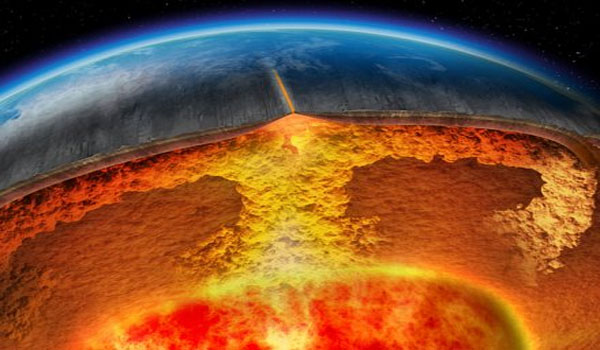 UTAH – Geologists at Brigham Young University have discovered what may be the world’s largest “supervolcano” that erupted in Utah’s own backyard. While there are a variety of volcanoes that blast away in different ways, super volcanic eruptions are the biggest that collapse into large calderas.

Geologists at Brigham Young University have discovered what may be the world's largest "super" volcano that erupted in Utah's own backyard.

While there are a variety of volcanoes that blast away in different ways, super volcanic eruptions are the biggest that collapse into large calderas. Yellowstone Park is the remains of one of those calderas and it's still very much alive and active. But, geologists think they may have found an equally as big if not bigger super volcano, one that shook up western Utah and eastern Nevada 30 million years ago. The eruption is hardly visible to the naked eye now, but underneath and in surrounding formations, the evidence was waiting to be uncovered. "As far as we know, the Wah Wah Springs eruption is the largest known explosive volcanic eruption," said BYU professor of geology Eric Christiansen. The eruption and collapse of the super volcano released almost 6,000 square kilometers of magma. "It moved over a flat landscape covering 12,000 square miles in western Utah and eastern Nevada. It would have been unimaginable devastation." said Emeritus BYU geology professor Myron Best. The magma flow extended beyond current-day Panguitch and north almost to Delta and south almost to St. George. As the ash was caught up in the jet stream, it carried as far as Nebraska. "The magma is erupting explosively as the flow spreads across the landscape," Best said. Compared to Mt. St Helens — which is a different kind of volcano — Utah's super volcano was 5,000 times larger. Deposits left behind in southern Utah from the single eruption are 13,000 feet thick. Thousands of rock samples collected over 30 years currently reside inside a repository at BYU with drawers extending from floor to ceiling. 600 students, 30 summers of field work and a lot of geologic mapping and analysis were utilized to confirm the existence of Utah's super volcano.

However, unlike Yellowstone which is still an active caldera, Utah and Nevada's shared super volcano will unlikely ever erupt again, according to geologists.