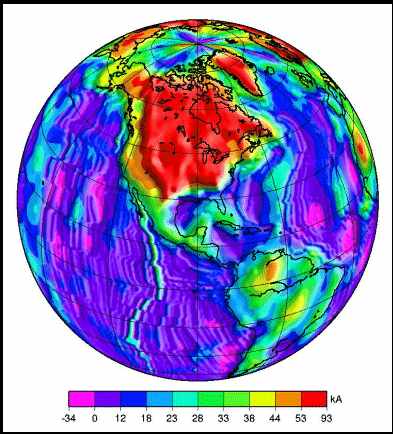 A grim report prepared by Commander-in-Chief of the Air Force Lieutenant-General Viktor Bondarev on the just completed scientific mission of North America carried out by 4 Tupolev Tu-95 strategic aircraft and 2 Ilyushin Il-78 aerial refueling tankers that “electronically swept” for “magnetic anomalies” from Alaska to California warns that a “catastrophic event” may be nearing for this region.

US officials, it should be noted, characterized this purely scientific mission as a “bombing run” that came within 50 miles of California, but which their Air Forces were able to repel by their launching of F-15 fighter jets.

This report, however, states that this scientific mission was necessitated by a “severe mysterious magnetic anomaly” detected by the Kosmos 2473 satellite on 3 June occurring in the Yellowstone region of the Western United States which resulted in what is called an “earthquake swarm.”

Most important to note about the 3 June Yellowstone “magnetic anomaly”, this report continues, are that satellite measurements show it being precipitated by the mysterious earthquake swarm hitting the Brooks Range mountains in Alaska, and which seismologists are still at a loss to explain.

The information relating to the linking of these two “events”, this report says, was further verified by the United States Geological Survey (USGS) magnetic anomaly maps and data for North America showing a strange magnetic “disturbance/ripple” emanating from Brooks Range and ending at Yellowstone on 3 June, both of these areas, it is important to note, being part of the Rocky Mountains that stretch more than 4,830 km (3,000 miles) from the northernmost part of British Columbia, in western Canada, to New Mexico, in the southwestern United States.

Of grave concern to Russian military authorities relating to these “events”, General Bondarev says in his report, was the “catastrophic effect” they had on the advanced “magnetoception” inertial navigation systems employed by many US-NATO-Russian warplanes which use these highly sophisticated aircraft flight devices.

The two US fighter jets crashing on 4 June, this report continues, were identified as a US Navy F-A-183 that went down when the pilot was attempting to land aboard the carrier Carl Vinson, and a US Marine Harrier AV-8B jet that crashed into a residential community in Imperial, about 90 miles east of San Diego, both of them occurring within hours of each other.

This report notes that no civilian aircraft would have been affected by this “magnetic anomaly” as only the most advanced military aircraft employ these “geomagnetic-satellite” coordinated flight systems which enable them to “hug the terrain” not unlike the magnetic systems used by birds and insects to navigate.

Russian concerns relating to “magnetic anomalies”, it is important to note, are related to the rapidly shifting north magnetic pole which since 2005 has been moving at a rate of 40 kilometers (25 miles) a year from Arctic Canada toward Siberia.

Frightening independent research from last year (2013) further warns that this shift is still picking up speed and according to this researcher should reach Siberia in at least within 2 years. [See video HERE (banned in US)]

One of the effects of the rapidly shifting magnetic north pole being noticed the most, this report notes, are the airport runway systems being disrupted because of it, and as we can read one such 2011 example which occurred in the US:

“Tampa International Airport was forced to readjust its runways Thursday to account for the movement of the Earth’s magnetic fields, information that pilots rely upon to navigate planes. Thanks to the fluctuations in the force, the airport has closed its primary runway until Jan. 13 to change taxiway signs to account for the shift, the Federal Aviation Administration said.

The poles are generated by movements within the Earth’s inner and outer cores, though the exact process isn’t exactly understood. They’re also constantly in flux, moving a few degrees every year, but the changes are almost never of such a magnitude that runways require adjusting, said Paul Takemoto, a spokesman for the FAA.”

The most chilling aspects of General Bondarev’s report relating to these “events” are the equations he uses in postulating that what is now occurring in North America with these “mysterious magnetic anomalies” occurring over a large expanse of the Rocky Mountains, and when combined with the rapidly shifting magnetic north pole and growing evidence of global climate change, give “huge credibility” to what is called “The Expanding Earth Theory”.

The expanding Earth or growing Earth hypothesis asserts that the position and relative movement of continents is at least partially due to the volume of Earth increasing and stands in contrast to that of plate tectonics, but which new findings relating to “aether theories” and dark matter, General Bondarev summarizes, means “grave consideration” must be given to the words of University of California, Davis, cosmologist Dr. Andreas Albrecht who warned: “We've hit some really profound problems with cosmology Ð with dark matter and dark energy, that tells us we have to rethink fundamental physics and try something new.”

Or in simple terms, this report ends, “We may be on the verge of a catastrophic North American “event” that could possibly change the world forever, we should be prepared.”

June 13, 2014 © EU and US all rights reserved. Permission to use this report in its entirety is granted under the condition it is linked back to its original source at WhatDoesItMean.Com. Freebase content licensed under CC-BY and GFDL.

[Ed. Note: Western governments and their intelligence services actively campaign against the information found in these reports so as not to alarm their citizens about the many catastrophic Earth changes and events to come, a stance that the Sisters of Sorcha Faal strongly disagrees with in believing that it is every human beings right to know the truth.  Due to our missions conflicts with that of those governments, the responses of their ‘agents’ against us has been a longstanding misinformation/misdirection campaign designed to discredit and which is addressed in the report “Who Is Sorcha Faal?”.]