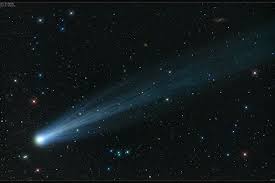 We may have seen the last of comet Ison

Although scientists can’t be totally sure at this point the sun-grazing comet is producing far weaker emissions than it was. Astronomers have noticed a sharp change in Comet Ison over the last 24 hours. Speaking to Spaceweather Michel Drahus of Caltech said: “We observe consistent, rapid fading of the molecular emission lines between Nov. 21 and Nov. 25 by at least a factor of 20. This may indicate that the nucleus is now at best marginally active or that… it no longer exists,”

Astonomer Karl Battams of NASA stated: Astronomer Karl Battams of NASA’s Comet ISON Observing Campaign comments: “[The fading emission lines] could indicate that the nucleus has completely disrupted, releasing an enormous volume of dust while significantly reducing emission rates. Fragmentation or disruption of the nucleus has always been the highest risk factor for this comet so if this has indeed happened then while unfortunate, it would not be a surprise. However,these reports are new, and while they are undoubtedly valid, we do still need to keep observing the comet to be sure what it happening. Remember: Comet ISON is a dynamically new sungrazing comet, fresh in from the Oort Cloud, and the last time we saw an object like this was never! Furthermore, a sungrazing comet just three days from perihelion has never been studied in this kind of detail – we’re breaking new ground! When we factor in your standard ‘comets are unpredictable’ disclaimer, what we have is a huge recipe for the unknown.” (source)

The Sun is VERY quiet right now. Todays sunspot number is 47. Two spots, AR1904 and AR1905 both have the energy to produce M-class flares but neither are Earth facing at this point so any effects would be minimal. There are no coronal holes on the Earthside of the sun. Delivered by The Daily Sheeple Contributed by Chris Carrington of The Daily Sheeple.

Chris Carrington is a writer, researcher and lecturer with a background in science, technology and environmental studies.

Chris is an editor for The Daily Sheeple. Wake the flock up! - See more at: http://www.thedailysheeple.com/comet-ison-may-have-fragmented_112013#sthash.AvaVG8uc.dpuf