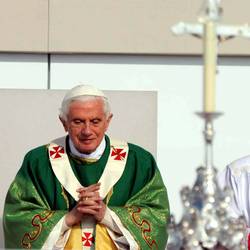 According to Italian daily newspaper "Libero", Pope Benedict XVI is thinking about leaving the papacy next April, when he will turn 85

There is one front page news story that will certainly not go unnoticed: that is, that the Pope is thinking about resigning during the Spring of 2012. Journalist Antonio Socci has confirmed the same in the Italian daily, Libero.

"For now,” Socci writes, “he is saying that this may be true (Joseph Ratzinger’s personal assumption), but I hope the story does not reach the news. But this rumor is circulating high up in the Vatican and therefore deserves close attention. The Pope has not rejected the possibility of his resignation when he turns 85 in April next year.”

Socci recalls that the assumption he will resign, without any hitches, was the same thing Ratzinger talked about in an interview in the book “Luce del mondo” (Light of the World), when, in response to a question by interviewer Peter Seewald, he said: “When a Pope arrives at a clear awareness that he no longer has the physical, mental, or psychological capacity to carry out the task that has been entrusted to him, then he has the right, and in some cases, even the duty to resign.” Furthermore, in another passage, Benedict XVI wondered if he would be able to “withstand it all, just from the physical point of view.”

Socci makes the following observation in today’s edition of Libero: “Today, Pope Benedict seems to be in really good form; just the same, there’s the issue of his age and just how much energy he has left.” But the writer/journalist also recalls another passage from the same book interview, which has to do with the attacks and controversies related to the pedophile priests' scandal: “When there is a great menace, one cannot simply run away from it. That is why, right now, it is definitely not the time to resign.”

“It is actually at moments like these that one needs to resist and overcome difficult situations. One can only resign at a time when things are calm, or simply, when nothing more can be done about it. But one cannot run away right when the threat is alive and say, ‘Let somebody else take care of it.”

The issue of papal resignations has been the subject of debate for many decades. Pope Pius XII had prepared a letter in which he stated he would resign if he were taken away by the Nazis (“In that way, they will have Cardinal Pacelli, but not the Pope.”)

Pope John XXIII, while talking with his confessor, had taken into consideration that he would possibly have to leave when his illness worsened. Even Pope Paul VI, who had established the exclusion of those who were over 80 from the conclave, and renunciation of the episcopal seat at the age of 75, seriously thought about resigning in 1977, when he turned 80, but his entourage dissuaded him from going ahead with this. This issue came up again, in a dramatic fashion, with Pope John Paul Il’s long illness; he had even prepared a letter of resignation.

Anyone who knows Ratzinger would confirm that the answer he gave to Seewald, is what he feels would be best, in the event of him becoming physically, mentally, or psychologically incapacitated. However, such a possibility seems, at the moment, somewhat remote. In fact, one is immediately struck by the contrast between the front page story in Libero and the images coming from Germany, where Benedict XVI is concluding an historic trip, during which he made 18 speeches in four days. Many of these put him under considerable pressure, especially as they were entirely written by him. The German press was astonished at the old Pontiff’s endurance, which he demonstrated by the fact that he was able to manage all the exhaustion from moving around; he did not sleep more than one night in a single bed. And he was successful in carrying out a packed schedule of engagements, meetings, vigils, and celebrations.

This would show that nothing of what Benedict XVI himself said in answer to his alleged plans to resign, seems to be materialising.

Finally, a total media “distortion” caused an outburst of fear after explosive gunshots were heard yesterday in Erfurt. They were fired by an unbalanced youth with an air gun, who targeted two security guards, without wounding them, on a street just 500 meters from where the Pope was to celebrate mass, two hours before Ratzinger arrived. False alarms that were blown out of proportion by the media, were also raised when Pope John Paul II visited Mexico City in 2002,and a year ago, when Pope Ratzinger was in England.